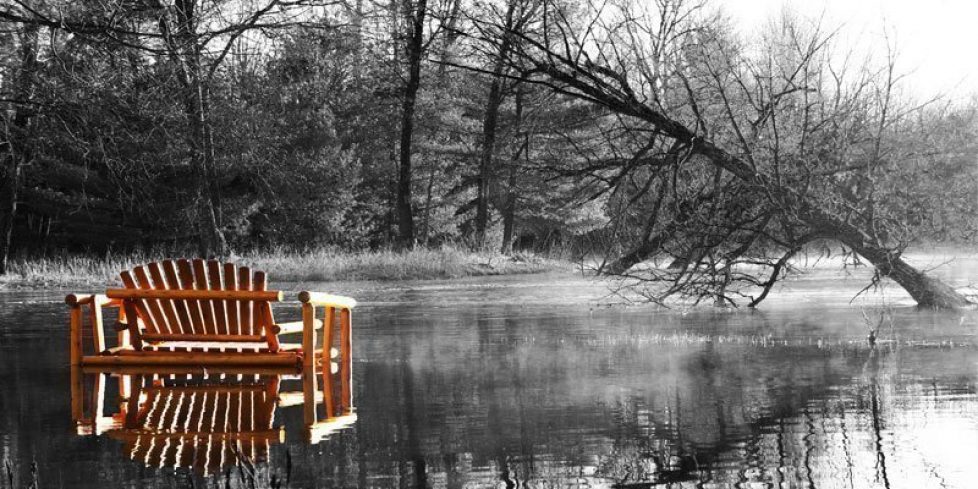 Chip reached across his bed in the dark and smacked the top of his alarm clock, switching it off. Two hundred and sixty-nine days of preparation, all the thoughts, research, doubts, dry runs, and pain.

Less than an hour.

Chip sat up, and the bright blue time on his digital clock bled across his face as it flipped over to 6:31 a.m.

It was Christmas morning. As Chip got dressed, millions of American children, snuggled in warm beds, dreamt excitedly of videogames, stuffed ponies, and battery powered helicopters. Their parents, some warm, some bitter and resentful were either loathing or loving the holiday.

Chip didn’t care about any of it.

He was going to shoot himself.

Several months prior, after Chip had finally made up his mind that he was going to end his life, he had picked a series of numbers written on slips of paper out of a stainless steel cooking pot. He had picked 12 and 17 originally, so he picked three more times, until he landed on 25.

He looked in the speckled mirror and couldn’t help but notice the heavy bags under his eyes as he brushed his teeth.

The night had been spent watching his final hours and now minutes tick off the clock. He checked his watch.

A .38 snub nose revolver sat in its brown case on Chip’s kitchen table, loaded, 2 bullets, one to do the job. One for insurance.

There hadn’t been a specific decision point, maybe a realization. He was thirty-nine. His father had died when he was in his twenties, a car accident. His mother had passed three years before this Christmas, cancer. A sister, her husband, a few nieces and a nephew lived five hours south in the suburbs of Chicago.

Chip’s sister had invited him down for Christmas after their mother had died, which Chip made the trek for, only to endure an afternoon of small dogs nipping at his ankles, his brother-in-law Terry bragging about his new truck, and his nephew Bam asking Chip if he was a faggot.

He had never made the trip again.

Chip opened the gun case on the table, checked the chambers, one…two. All was in order. He put on his boots and went outside to warm up his car. Christmas in Wisconsin. There was a dusting of snow from the night.

“Better bring a broom.” thought Chip as he went back into the warmth of his small house. It was a small adjustment.

He checked his watch.

It was incredible how much was caught up in the span of a minute.

And then it was gone.

He grabbed the gun, flipped the light switch and got in his car. Chip pulled out of his driveway and headed for the bench. He had forgotten the broom.

The bench was the first, and only, location that came to Chip’s mind when he imagined committing his final act. It existed just down the road, past the bridge, stained a brilliant desert sunrise orange, sitting just a few feet off the water of the Black River. Nobody knew who had built the bench or placed it there. There was no park, no path, no sign, nothing: just a well-built bench facing the river. Chip saw it every morning and every night going to and from work. Sometimes it would overlook the morning mists coming off the river and other times during the spring, it was completely engulfed by the black waters of the river. Chip had shoveled a path leading to it the previous night.

“I forgot the broom,” thought Chip as he rounded the icy corner leading up to the bridge.

There was another car.

There was a car parked just beyond the bridge.

Right where Chip was supposed to park. He slowly passed beside it and his headlights ran across the top of the bench down by the river. He had told no one of his plans.

Chip parked on the other side of the bridge, grabbed the gun case, and approached the path he had shoveled the night before.

“Mornin’” said a man as he jerked his body to face him. Chip almost dropped the gun. He stood, frozen.

“You from around here?” asked the man. Chip’s eyes were adjusting to the changing light. The glow of the sun was beginning to break through the forest and run across the ice on the river. He could see a white smear of a smile on the stranger’s face. Chip remembered to breathe.

“This is really something isn’t it?”

Chip pushed the gun case into his armpit a little more.

“Do what? I haven’t done anything,” said Chip. He felt a little light-headed and remembered to relax his knees.

“The bench. This must be some sort of park or something. I didn’t see signs or anything though.”

“Somebody must take care of it then.”

“I don’t think anybody takes care of it.”

“Huh, looks like somebody shoveled a path and cleaned it off. That’s how I saw it. I was driving all night, coming up from Kansas City to see my dad up north, got a little off the beaten path, and I came around that corner over there and saw this thing. Somebody must have taken the time to clean it off so people could see it.”

Two hundred and sixty-nine days of planning, a .38 with two bullets, a warm car, a note left in the bedroom, and now this.

The stranger’s smile dipped for a brief moment before returning with even more fervor. He patted the back of the bench enthusiastically.

“I’m sorry, I’ve been talking your ear off this whole time. There’s plenty of room.” The man spun around and faced the river again.

Maybe he was dead.

He had to face it, regardless.

He had to keep moving.

Chip reluctantly moved up to the left side of the bench. The gun case pinched the skin on his side greedily as he sat.

“Something else, isn’t it? How many fish you think are under this stretch…right now?”

The stranger reached down, packed a snowball, and threw it out onto the ice in front of them. Chip watched in the growing light as the snowball impacted the ice and a snake of a shadow grew behind it.

“From here to there,” said the man. “How many fish? I bet it’s cold down there. Fish don’t feel the cold like we do though.”

The question somehow slipped into Chip’s overcharged consciousness. An intrusion.

“There aren’t fifty fish down there.”

“That’s too many. You could drop a line here and not catch anything all day. Nobody catches fish here.”

“Ah, you’re thinking about the fish that you catch. Those are the dumb ones. Think about it, fish and everything else traveling for hundreds of miles, passing by, right in front of us. You ever see when they shock the water and all the fish come up?”

“Why are you here?” asked Chip. He finally looked up at the stranger. His smile faded.

“I figured it was as good a place to stretch my legs as any other. It really is something, being out here and all, the bench I mean.”

“You don’t have to tell me about the bench.”

“I’m sorry if I offended you. It’s Christmas morning right?” His smile was idiotic.

Chip slipped the gun case out from his armpit and unzipped it, revealing the pistol on his lap. The man sat silently. Chip looked down at the gun. Cold.

“You know how many nights I’ve spent pulling the hammer back on this, pulling the trigger, feeling the barrel slap against my head…imagining what it’s like not to exist?”

“You don’t need to understand,” Chip grabbed the pistol and looked out across the ice, at the growing light filtering through the trees. “You need to leave.”

“it’s kind of funny y’know…me planning this, getting the gun, practicing, thinking about this bench…it’s been one of the best times I can remember.”

“Don’t you have family?”

The stranger looked out across the ice. Light from the sun was now highlighting patches on the river.

“Why don’t you come with me?” asked the stranger. “It’s only a few more hours, and it’s just me and my dad. Nothing big. I won’t tell anyone.”

Chip clicked the hammer back. One trigger pull was all that it was going to take. Easy as that.

“I’m telling you to leave. If you don’t, I’m going to go through with it anyway.”

“Come with. Please come with. Take some time…”

“I said get outta here!” yelled Chip. His voice echoed across the ice. A crow cawed in the distance. It was the first time Chip had heard his own voice.

The stranger looked down at his boots and off to the side of the bench. He stuck his hand in the snow again, this time coming up with nothing. He stood.

Chip stared out onto the shining ice of the Black River. He could hear the squeak of the snow under the stranger’s boots as he walked back toward the bridge. Chip pretended like he didn’t notice the receding sound. He couldn’t focus on anything else.

Chip looked out into the growing Christmas sunrise. A warm tear streamed down his cheek.

“I never would have seen it if you hadn’t done that. Maybe you built the bench. I don’t know. I’ve never been here before in my life. I live ten hours away. All I know is that it’s Christmas morning, I got lost on my way to see my dad, and now we’re here…and now I’m leaving.”

The squeak of snow under boot continued and faded.

Chip held the gun in his lap.