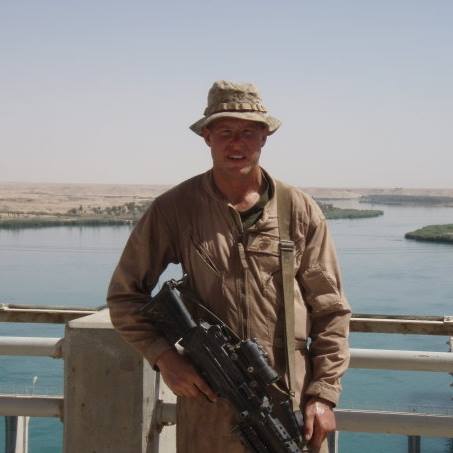 My perception of Veterans Day has shifted over the years. Before joining the Marines in 2005, to me, Veterans Day was a holiday for heroes, a day for honoring gods among humans—those that had sacrificed their lives and those that were selflessly serving their country. I wanted to join those ranks, and eventually I did. The USMC was eager to take me on as an infantryman in 2005 as the war in Iraq was intensifying.

When I came home from boot camp on leave in the spring of 2006, I was settling into my new identity as a Marine. Returning to my family home in Wisconsin felt strange. My surroundings were familiar, but I was different.

There was a Memorial Day ceremony coming up at the local cemetery, and my mother asked if I would put on my new dress uniform, my Alphas, and participate in the ceremony.

I remember feeling this extraordinary weight when she asked me to go. I told my mother that I didn’t want to do it. That I couldn’t do it. Who was I to stand next to the veterans at that ceremony? Some of them had fought in the Gulf War, the Vietnam War, the Korean War, and even WWII. I had earned the title of Marine, but beyond going through boot camp, I hadn’t done a damn thing. I didn’t rate. I was what we call in the military a “boot,” and I couldn’t possibly stand there next to these giants of the human spirit and what they represented. I didn’t quite have words for what that was, but I knew that it was too great for me to participate in.

My mother insisted that I go until finally, it got to a breaking point. I told her that I couldn’t do it. I was so upset that I actually shed tears. She relented, and I remember asking myself, “Why do I feel so conflicted on this topic?” Looking back, I can say it was because I was in the process of ‘crossing over’ into my military identity. I felt so conflicted because I was now supposed to be one of those unfathomable gods representing virtues that I could not previously comprehend as a civilian. At least that’s what my culture had taught me.

My latest romantic relationship had collapsed fantastically. I was working 3rd shift stocking shelves in a grocery store. I was living in my parents’ basement. Drinking. Doing drugs. Not sleeping. I didn’t know it at the time, but I was desperately trying to process my feelings while writing “Inner Harsh.” Beside the writing, things were not going well for me.

I remember that year, I decided to get my free meal at Applebee’s for Veterans Day. I was hesitant. Who was I to get this free meal worth $15? I was trash. I didn’t want to sit around and tell war stories. I didn’t want to talk about what I was up to after the military. In my mind, nobody understood what I was going through. Hell, I didn’t even know what I was going through. All I knew is that I felt like crap, and when somebody told me, “Thank you for your service,” I didn’t know how to feel or talk about it, because I never had developed the vocabulary. My service and my pain were both unspeakable.

I just wanted to show my VA card at Applebee’s, get my damn steak, eat, and continue on with my miserable existence.

I didn’t go in for my free meal for the next 4 years or so. I didn’t know what to do with my identity as a veteran. I pushed it down. Kept it out of sight. It wasn’t out of shame or anger, I just didn’t know what to do with it. I left the country and lived in China for a few years. I pretended like my identity as a Marine and a veteran didn’t matter. Of course, when I look back, I was hilariously wrong. I wrote a few plays for an expat community theater in Suzhou, China, and the picture I submitted for the profile board was the one below, of me going off the rails in 2013 – 2014 in my parents’ basement, holding an AK-47.

It was the only picture of strength that I had that wasn’t from my time in the military. I hadn’t entirely succeeded in suppressing my veteran identity. I wanted to show it, but I didn’t want to show it. I was determined to not “just” be a veteran. I couldn’t post a picture of me in uniform, because only a jackass that couldn’t move on with his life would do such a thing. Or that’s what I told myself.

Of course, this had all been bullshit. I was suppressing a major component of my identity. I wouldn’t be forced to confront that identity again until I re-entered the United States, settled down in Rhode Island with my girlfriend, and eventually started grad school. The vet coordinators at URI at the time, Jeff Johnson and Rachael Garcia, invited me to enroll in a class exclusively for transitioning vets. I needed the credits to take full advantage of my remaining GI Bill. That was the practical reason. More importantly, the class forced me to sit in a room with several other veterans, something that I had never done before. It was an uncomfortable yet positive experience that forced me to to think about being a veteran outside of a passing “Thank you for your service” on Veterans Day.

That following summer of 2019, I met Dr. Mark Santow, director of the Providence Clemente Veterans’ Initiative, while I was tabling for a Frequency Writers event in Providence. I had been running an expressive writing workshop, Endless Beautiful, for a few years at that point and had done some work with Frequency. During our first conversation, Mark said that he was working with veterans. Because of my contact with other veterans at URI earlier that year, and the resulting exploration of my veteran identity, I told him that I was a vet. I spent the next few semesters in PCVI exploring my veteran identity even more.

I became more comfortable talking about and claiming my identity as a veteran. I eventually decided to create a writing program for vets as part of PCVI. I designed and taught the PCVI Summer Writing Seminar in the summer of 2020. The class went well, despite COVID-19, and I look forward to running the next version in the summer of 2021.

So what are my feelings about Veterans Day now that I’ve been a veteran for several years?

We must push against and destroy abstract totems and untouchable sacred cows that our culture has built around military service. Military veterans in this country, however noble our sacrifice, whether we are dead in the ground or living our lives as Americans, were and are people with hopes and dreams, troubles, and successes—just like any other American.

Yes, honor us. Military service is an incredibly important act. But don’t limit our range as human beings. Don’t demand that we continue to tell the same stories and trap us. It’s okay to thank a servicemember for their service, but ask us and genuinely care about how we are today, as a person, not a caricature of a person. Acknowledge us as full human beings with kids, hobbies, and anxieties.

Listen and learn from us.

I’m not going to lie, opening these lines of communication might be awkward as hell, but we have some work to do in this country. In a study of U.S. Military veterans seeking mental health treatment from 2011 – 2012, researchers found that serving in a war zone meant 43% decreased odds of suicidal ideation, compared to those that did not serve in a war zone (Blosnich et al., 2019). This finding surprised the hell out of me. It flies in the face of the dominant narrative about our veterans. Our culture assumes that if someone has been to a war zone, they must be terribly damaged “I could never imagine what you’ve gone through” or if they were not terribly damaged, then they are somehow not veteran enough. They don’t rate. Just like I didn’t rate after getting out of boot camp.

I felt that inadequacy again after getting out of active duty. Yes, I was a USMC infantryman, but I never got into any intense firefights during my deployments. I had friends that were torn up by machine guns, had limbs blown off, messed up by IEDs—I was in crazy situations that happen when you’re driving around Iraq during a war, but no gunfights, which meant no coveted Combat Action Ribbon (CAR) for an infantryman. When I finished my deployments and got out of active duty in 2009, I felt that I hadn’t done my job.

But how could I possibly feel that way if I hadn’t lost a limb or had buddies die in my arms? You know, the unspeakable horrors of war that I, and every other American, had seen in countless war movies, but never spoke about openly. I didn’t have an open conversation about my service for 10 years after getting out, because everyone was afraid of “reopening wounds.” We’ve built a system that assigns trauma as currency with our veterans and gives them few options to move out from that trauma.

By just throwing a flag up, or saying “Praise the Troops” and running a parade, and not digging any deeper to understand the people that have and are carrying out military service, our country is saying, “We honor you, we are in unspeakable awe of your military service, and for that, you must carry this unspeakable burden. If you haven’t experienced trauma, then you better find some, because we need you to carry that and let it torture your soul, otherwise this whole thing doesn’t work.”

How do we break this down as a society? We develop a space for open discourse. We demystify military service and our veterans. We encourage veterans to tell stories, not just war stories, but stories as human beings, as Americans, as neighbors, sisters, mothers, brothers. We give them a path forward and don’t shackle them to their past or to a narrative that is dictated by the dominant culture—give them a voice, authentic representation, and not just on Veterans Day, but every day.

That is how we can honor military service.

Follow this link to donate to the Providence Clemente Veterans’ Initiative.